Growing up we all thought we’d be much cooler parents than the ones we had ourselves. It isn’t until our childhood years are long behind us and we have children of our own that we realise, firstly, our parents weren’t that bad, they were pretty great in fact and secondly, we may have become more like them than we ever intended. With that shock on the forefront of my mind, here’s 11 things I never thought I’d say…until my mother’s voice slipped out of my mouth.

All Irish mammies have an appreciation for the weather but it wasn’t until I learned how expensive tumble dryers were to run when you’re washing for a family that I finally understood the value of ‘drying weather.

“Take a jacket, that weather will be the death of you!”

We’ve all stood outside nightclubs in miniskirts and not much else. As we slowly turn into human ice pops, we instantly regretted not taking mum’s advice and grabbing a coat. However, we certainly won’t be admitting that to her anytime soon.

“This isn’t a hotel”

A retort typically used after a request for friends to stay over or during a Sunday spring clean, it’s one I never thought I’d use (because I was going to be so much cooler). To truly sound like your mother (or mine) feel free to add, ‘what did your last slave die of?’

If there’s one thing an Irish mammy does well, it’s a good old-fashioned guilt trip.

“Wait until daddy hears about this”

Oh yes…this is particular low point. If the guilt of mammy doesn’t work then the fear of daddy surely will. In a perfect world we wouldn’t need to threaten our kids with daddy in order to get things done but in desperate times you just want to restore some order so your little one will eat their peas, take a bath and go for a nap.

Our Related Content
4 sun safety tips for the whole family

“The money tree died years ago”

Parents have grown-up jobs. They make grown-up money. How can they not afford to buy me things? This logic made such sense during my teen years yet, as I’m now (painfully) aware, there are also some very grown-up bills to pay.

“A letter came for you…do you want me to open it?”

What? No! Why would you do that?

This one I understand more as an adult than I ever did as a child. You have this little person whose whole life you have access to and all of a sudden there’s a part you’re not allowed to see? How maddening!

“Let me see if your tongue is black?”

For heaven’s sake who needs a lie detector when you have the tried and tested method of checking a child’s tongue? This little phrase is perhaps one of the most useful I’ve picked up from my mother as far back as my babysitting days. 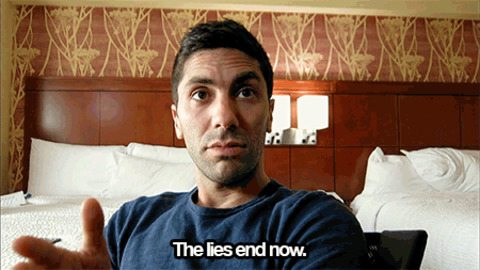 “Don’t make me count to three”

More terrifying words were never spoken…only to be used in the most serious of circumstances.

“When someone gets hurt don’t come running to me”

Everyone always assumed mammy was just a worry wart until someone did get hurt and you totally freaked out!

While no one wants to see children fail, there is a certain exasperating feeling when they ignore our well-seasoned advice because ‘they know better’. As long as the situation isn’t too serious, I now feel no shame in dropping these four words to remind everyone that mother knows best.

Four things you need to know about the Baptism Barrier

10 reasons why your mum is your best friend