It’s been confirmed by Kensington Palace that the Duchess of Cambridge is officially expecting her third Royal Baby in 2018.

Today, Kensington Palace twitter sent the public into a frenzy as they announced that Kate and William are expecting their third child to be born in April 2018. 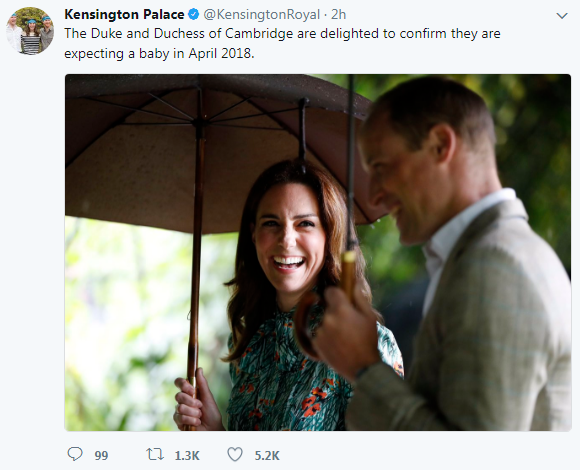 Having suffered from acute morning sickness, aka Hyperemesis Gravidarum, as with her other two pregnancies, Kate took some leave from her royal appearances until recently. But Kate was seen with her usual charm and elegance at an event this past weekend. Even taking the time to do a little dance with Paddington Bear as she and William visited the famous train station.

The Princess and the Bear. Kate, and William, meet the star of Paddington II at his namesake station pic.twitter.com/alzG27W4jI

Kate’s style has always been the envy of women everywhere, but none so much as her maternity style which always seems effortless and feminine. Here she wears a beautiful pink floral dress with her trusty black, block-heeled shoes – perfect for doing a few dips and twirls!

The Crown actress Claire Foy opens up about her struggle trying to breastfeed while working.

What do you think it is?

Some Kardashian babies are on the way… but who’s pregnant in that family? Find out!

How did the Duchess of Cambridge leave the hospital so fast?